Opening of the exhibition

I am 11 years old and I live in Bañuelos, in Burgos. In our village, we don't have electric light.  But in our school, we do have a printing press! At least we did.  Because our teacher, Antonio Benaiges, has disappeared and the new teacher doesn't want to us write down our ideas any more, like the text we wrote about the sea. So the school newspaper is stopped. We also no longer write to the schools in Mexico and in Barcelona. It's a pity, because I liked writing very much. My father says Mr. Benaiges is with another woman now and that he has fled out of the country. But my mother thinks that he has been taken away by the soldiers, because he doesn't go to church and because he taught us about the republic. I don't know which one is better; I just hope he will return one day...
Most of us visited the opening of the exhibition in the museum of León. 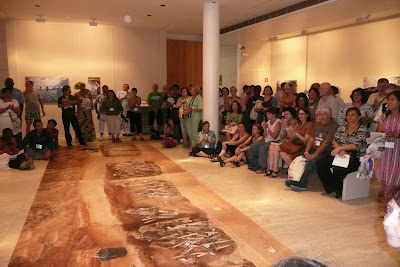 76 years ago on July the 25th 1936 the Freinet-teacher Antoni Benaigés was killed in secret by the Franco regime and put in a mass grave together with more than one hundred people. But his grave was found. You can see it in the middle of the picture thanks to the group of Sergi Bernal. He follows the traces through history in the powerful language of images. They are visions of history through the eyes of people who have never seen it. On the site verkami.com you can watch the film “El Retratista” presented during the opening. 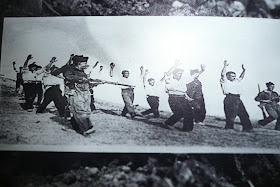 The connection to our main subject men and women is evident in the exhibition. In the first room are presented photos like this:

Most of the people found in the grave were men. To give relations to the time the museum added pictures of imprisoned women in another room. Women were forced to pray and to work with sewing machines. Their children were educated in the system of the Franco regime.